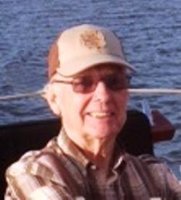 It is with great sadness that the family of David Langille of Saint John, cherished husband of Valerie (Fudge) Langille announce his passing, which occurred on Wednesday, May 2, 2018 at the Saint John Regional Hospital. Born on April 22, 1933 in St. Martins, he was the son of the late Wendell Langille and Lillian (Cairns). In his earlier years, David was employed as a barber and prior to his retirement, he had a long working career with Parkway Mercury as sales manager, a career he truly enjoyed. David loved boating, a good game of horseshoes, cards and enjoyed his time as a goalie in his younger years. Most of all he treasured the times spent with those he loved and will always be remembered as a loving and devoted family man and friend to many. In addition to his loving wife of 64 years, Valerie, David is also survived and will be dearly missed by his children, Wendy Emmerson (David) of Maces Bay, Wayne Langille (Sharon) of Saint John, Lynda Drew (Robert) of Rothesay, Mark Langille of Saint John, Scott Langille (Kelly) of Rothesay and Lana Doucette (Richard Stone) of Saint John; brother, Norman Langille (the late Valerie) of Saint John; sisters, Beverley Langille of St. Martins, Barbara LaBlanc (the late Joseph) of St. Martins, Sharon Guitard (the late Joe) of Saint John and Valerie Smith (Wally) of Saint John; brothers-in-law, Gordie Langille of Saint John, Gerry Horgan (Roberta) and David Fudge (Betty); precious grandchildren, Jennifer Theriault (Greg), Jason Urquhart (Hal), David Langille (Michelle), Derek Langille, Darren Langille (Kyla), Brad Drew (Tiffany), Justin Drew (Melanie), Quinn Langille, Clarke Langille (Alex) and Logan Doucette (Curtis) and her father, Danny Doucette; special great-grandchildren, Avalon, Hayden and Thatcher Theriault, Emma and Allie Langille and Leland Drew; as well as several nieces and nephews. Besides his parents, he was also predeceased by his brother, James Langille (the late Dale) and in-laws, Robert and Margaret Fudge; as well as brother and sister-in-law, Robert Fudge (Althea). David’s family would like to express their heartfelt thanks and appreciation to the entire staff of the Loch Lomond Villa for the excellent care and friendship that was always provided to him and his family. Also a sincere thank you to the staff of the SJRH Palliative Care Unit for their special care and compassion. Resting at Brenan’s Funeral Home, 111 Paradise Row, Saint John (634-7424) with visiting on Friday, May 4, 2018 from 2:00 - 8:00 PM. A Mass of Christian Burial will be celebrated from the Cathedral of the Immaculate Conception, 91 Waterloo Street, Saint John on Saturday, May 5, 2018 at 10:00 AM. Interment will take place in Browns Cemetery, Bains Corner. For those who wish, remembrances may be made to the Boys & Girls Club of Saint John.