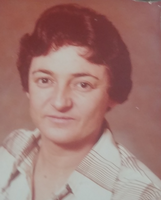 It is with great sadness the family announces the passing of Deeda Lynn (Marr) Trecartin wife of Murray E. Trecartin Jr. which occurred on July 18, 2019 at Rocmaura Nursing Home. Born in Saint John NB on December 14, 1946 she was a daughter of Alfred and Hilda (Maher) Marr.

Besides her parents she was predeceased by one brother:  Norman Marr.

There will be no funeral home visiting or service. Interment will take place in Fernhill Cemetery. Arrangements are under the care and direction of Brenan’s Funeral Home 111 Paradise Row, Saint John, NB, (634-7424). For those who wish remembrances to the Canadian Cancer Society would be appreciated by the family. Online remembrances and condolences may be placed at www.brenansfh.com.