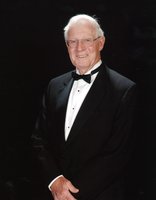 It is with great sadness that the family of George O’Brien, husband of Eleanor (Boyle-Walsh) announce his passing on August 8, 2019 at Bobby’s Hospice at the age of 92.  George was born on October 17, 1926 to, in his words “the most wonderful parents anyone could have”, Joseph and Emily O’Brien.  He was the eldest of 10 children.

George touched a lot of people who respected and loved him.  He was a great story teller, always eager to relate his memories about his early years, both of family and working days.

George spent most of his life working for Irving Pulp & Paper Ltd., managing and later working on special projects for Mr. J.K. Irving, retiring at age 70.  Earlier in his career, he and his brother Jerry founded O’Brien Electric.

George loved to travel, both for work and his family.  He and his first wife Mary had many trips with the Saint John Art Club, the highlight being a 2 week trip to Russia.  Later, he and Eleanor enjoyed many trips to Europe, cruising, bus trips and taking the train across Canada.  George always said he had a great life and would not change a thing.

In addition to his parents, he was predeceased by his first wife, Mary (Frauley);  a son in infancy;  brothers: Jerry, Alfred and Everett; sisters: Margaret Roach, Shirley Vautour and Barbara Jean.

Many thanks for the care given to George by Dr. Lisa Turner, extra mural and Bobby’s Hospice.  We appreciate the angels we met along the way.