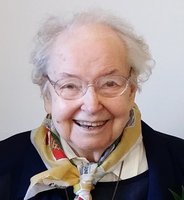 Sister Eleanor Lillian Bednar (Sister Mary de Prague) died peacefully at Ruth Ross Residence on October 1st, 2019.  Born in Ponoka, Alberta, she was the daughter of the late Martin and Mary (Holecek) Bednar.  Eleanor entered the Sisters of Charity of the Immaculate Conception on February 2, 1940.

One of her first missions was in Wetaskiwin, Alberta, where she taught grades 5 to 9 at Sacred Heart School and was the Principal there from 1942 - 1957.  Sister Mary de Prague then moved to Winnipeg, Manitoba where she taught at St. Joseph’s School from 1957 - 1968, returning to Wetaskiwin, Alberta and then to Saint John, New Brunswick to serve in Parish work in Catechetics.

She then returned to Winnipeg in 1974 and served in two parishes, St. Joseph’s and St. Anthony’s for the next ten years.  From 1984 to 1987 Sister Eleanor served as Pastoral Assistant in Fort Saskatchewan, Alberta, then returned to New Brunswick and served at Ruth Ross Residence as Co-ordinator until 1997.  Sister Bednar moved to Digby, Nova Scotia and resided at St. Patrick’s Convent while serving at St. Patrick’s Church in Music Ministry and RCIA.  Sister Eleanor then returned to Saint John in 2001 and resided at Ruth Ross Residence, remaining involved in advocacy for social justice.

Sister Eleanor loved life, enjoyed entertaining all with her musical renditions and continued to be physically active despite her advancing years.

Survived by her niece, Laura Bluck of Alberta and nephew, Leonard Bednar of Halifax.