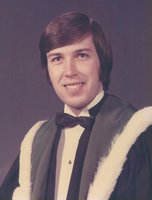 It is with sadness we announce the passing of Carl Lee Buckley, which occurred on September, 30, 2019. He was born on September 3, 1951 to Constance “Connie” Buckley and the late Wilfred Buckley.

After graduating from Saint John High School as an honours student he won two scholarships to university and then earned an undergraduate Bachelor of Science degree at UNBSJ, followed by a masters degree in computer science at UNB Fredericton.

Carl was employed as a programmer for NBTel, then worked as a physicist at Point Lepreau, a programmer at Nielson’s, taught at UNB, was a consultant for Andersons and in later years did personal tutoring. His interests included: racquet sports, chess, science fiction, baseball and hockey.

Carl was predeceased by his father Wilfred, aunts, uncles, cousins, and one nephew.

Arrangements are under the care of Brenan’s Funeral Home, 111 Paradise Row, Saint John, N.B. (634-7424). There will be no visitation. A private ceremony will take place at Harding’s Point Cemetery at a later date. Donations in Carl’s memory can be made to the Canadian Mental Health Association or to a charity of the donor’s choice. Online condolences can be made at www.BrenansFH.com.