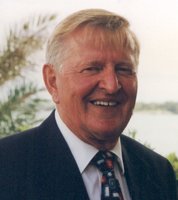 Bowyer Sidney Smith, in his 93rd year, passed away at the Saint John Regional Hospital on Sunday, October 13, 2019.  Born in Saint John, he was the son of the late Bowyer Sidney and Jean (McDonald) Smith.

Bowyer is survived by his wife, Carolyn (Cooper) Smith of Grand Bay-Westfield; three sons, David Smith of Vancouver, BC, Michael Smith of Bermuda and Andrew Smith of Saint John; daughters, Judy Gragtmans (Joost) of Stoney Point, ON and Dr. Rachael Smith (David) of Rhode Island; as well as several grandchildren.  Besides his parents, he was predeceased by his four sisters, Nora Dunlop, Anne Wright, Sheila Moore and Eleanor Hebron.

For those who wish, remembrances may be made to the SJRH Palliative Care Unit c/o the SJRH Foundation, Bobby’s Hospice or a charity of the donor’s choice.