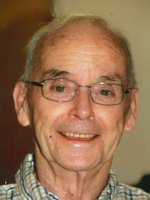 It is with great sadness that the family of Clarence “Bud” B. McHugh announces his passing which occurred on January 7, 2021, at the Saint John Regional Hospital. Born May 24, 1932, in St. George, NB, he was a son of the late Clarence and Pearl (Hatt) McHugh.

Bud was the former owner of the South Bay Service grocery store and gas bar. He also worked with Kelly Tire and ended his career retiring from Baxter Dairies. Bud enjoyed woodworking in his spare time and could often be found selling his projects at Rhoda’s. Bud loved to spend time at his cottage at Lake Utopia.  An avid fisherman, you could often find Bud casting a line off the point. For the last ten years Bud enjoyed living at Chateau de Champlain with his beloved wife, Anne.  He will be dearly missed by Anne and her family, including her children; Allyson and Geoff Bagnall, Andrea and Tracy Scott, Duncan and Anita Webster, and her grandchildren; Cailey, Thomas, Tara, Tessa, Lilly, Noah, Joseph, and Maria.

Arrangements are under the care and direction of Brenan’s Funeral Home, 111 Paradise Row, Saint John, NB (634-7424). A private family service will take place. Donations may be made to the Alzheimer’s Society of Canada or a charity of the donor’s choice. Online condolences may be placed at www.BrenansFH.com.