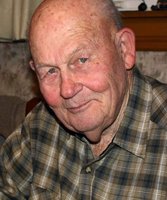 It is with great sadness and broken hearts that we announce the passing of Ernst (Ernest) Sperl, which occurred peacefully on January 10, 2021 at the Saint John Regional Hospital at the age of 93. He was born in Salzburg, Austria on January 4, 1928 and emigrated to Canada with his wife in 1954, spending his life in the Saint John/Quispamsis area with frequent trips back to his homeland.

Ernest is survived by his devoted wife of 66 years, Brigitte Sperl of Quispamsis, NB, daughter Ruth Sperl (Larry Taylor) of Saint John NB, granddaughters Julie Sperl (Troy) of Montreal PQ and Maria Sperl (Chris) of Dartmouth NS., sister Viktoria Rainer, sisters-in-law Annemarie Gruber and Adele Ward, as well as numerous relatives in Austria. In addition to his parents, Juliana and Johann, Ernest was predeceased by his brother Gerhard and his sister Waltraud.

Ernest was employed at Ocean Steel, MacMillan Rothesay Ltd. and Irving Pulp and Paper Mill as a machinist and was a member of the Canadian Paperworkers Union. He was also an accomplished welder and lathe operator and very skilled in many trades, never hesitating to lend a helping hand to anyone who needed it.

Ernest was a great outdoorsman with hunting and fishing being a large part of his life. He enjoyed his hobby farm of his earlier years, his trout pond, and his dogs. Ernie was a very social person and loved people. He was an active member of the Saint John Horseshoe League for many years as well as a regular bowler with the Fairview Seniors Bowling League. He also greatly enjoyed washer toss and socializing with his friends at Terreo Lake, where he and his wife built a cottage and had been enjoying it for the past 40 years. He and his wife Brigitte also enjoyed many travels throughout their retirement.

Ernie always had a twinkle in his eye and loved a good joke. He was a practical down to earth man who loved life and his family and friends a great deal. He was generous and kind-hearted, and exhibited enthusiasm and care with anything he undertook. His mischievous smile and good-natured outlook will be greatly missed by all who knew him.

Arrangements are under the care and direction of Brenan’s Funeral Home, 111 Paradise Row, Saint John (634-7424). There will be no visitation or funeral at this time, with a memorial to be held at a later date. For those who wish, donations may be made to the Cancer Society or any charity of the donors choice. Online condolences may be placed at www.brenansfh.com