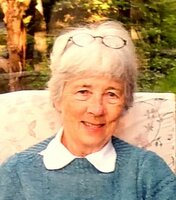 Doone attended Roslyn Elementary School and both Netherwood School (Rothesay, NB) and The Study. She trained to become an Executive Secretary and worked at Seagram’s until she married Bob. Always a keen competitor, she began skiing in the 1930s with her father at Murray Park (Westmount). Throughout the late 40s and until the mid 50s, Doone successfully competed throughout Quebec and New England with the Penguin Ski Club winning the Taschereau Cup (Mt. Tremblant) in the early 50s. When not on snow, Doone could often be found on the tennis court. Sailing, and in her later years, golf were other favourite activities. Knitting was a passion and she was known for her many sweaters with wild patterns and bright colours.

Doone and Bob were married in 1955 and spent their early years growing their family in Baie-d’Urfe, QC. Bob’s career took them to Salt Lake City, Vancouver and Toronto. In 1980 they settled down to a life of retirement at Lake Manitou, QC. There they spent winters skiing and many summer months cycling throughout Europe.

In 2012 Doone’s ill health prompted a move to New Brunswick to be closer to family where they spent happy times with grandchildren at the family cottage on the Belleisle.

The family would like to thank the many dedicated professionals at Embassy Hall, where Doone received excellent care for over seven years.

A celebration of life will take place in Ste-Agathe-des-Monts, QC, at a later date. Arrangements under the care of Brenan’s Funeral Home, 111 Paradise Row, Saint John, NB (506.634.7424). Remembrances to CONSERVATION MANITOU (www.conservationmanitou.ca) would be appreciated by the family. Online remembrances and condolences may be placed at www.brenansfh.com.