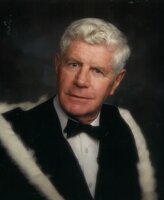 It is with both sadness and acceptance that we announce the passing of our father Melbourne (Mike) Brown, which occurred on May 4, 2022, at the SJRH.  Born on October 29, 1927, in Saint John, NB, he was the son of the late George William Brown and Agnes Marie (Foley).

Our Dad lived a full and healthy life, enjoying many vacations and travels with our Mom and many friends.  He worked within the Insurance business for over 50 years.  Dad was a voracious reader and a true scholar, earning his BA from UNBSJ at the age of 60.  Next to his family, sports were a huge part of his life as he played or enjoyed many including skiing (alpine, cross-country, and water), skating, swimming, baseball, badminton and hockey (GO HABS GO!). He took a love for golf at the age of 40 and enjoyed many rounds at Riverside and Rockwood with his sons, as well as dear friends Bob, Len, Brian, Fr. Dave and many others.

Dad often entered a room with a song bursting from his lips and seldom left it without a quote or verse from a familiar and oft-remembered poem. He was always thinking of others and had an affinity to those less fortunate. Dad spent many years giving back to the community in which he lived: He was a 4th Degree Knight of the Knights of Columbus and a Commissioner of Oaths. He served as a member or president of numerous organizations including: President of the NB Insurance Agents Association; Member of the Board of Directors of St. Joseph’s Hospital; Chairman of the Saint John Parking Commission; Co-Chair (Federal Riding) of the SJ Liberal Association; Member of the SJ Diocese Committee on Education; President (SJ Branch) of the Arthritis Society; Chairman SJ Heritage Trust; Chairman NB Catholic Health Association and recipient of the Performance Citation Award; and Member of the Board of the Canadian Catholic Health Association.  The Sisters of Charity held a special place in his heart.  He co-founded “Play Ball for St. Joe’s” which raised funds for the hospital for 15 years.

Above all else, Dad was a devout Catholic with a true and genuine reverence for God. We have no doubt that he will find peace and comfort as he is reunited with his beloved wife Mary in the hands of his Maker.

A Mass of Christian Burial will be held at Holy Redeemer Parish (Saint Pius X Roman Catholic Church), 316 Somerset Street, Saint John, on Monday, May 9, 2022, at 10 o’clock. Interment to follow in St. Joseph’s Cemetery, Saint John. Arrangements under the care and direction of Brenan’s Funeral Home (634-7424). For those unable to attend in person, the mass will be livestreamed via the Funeral Home website.

In lieu of flowers, donations in Mike’s memory may be made to a charity of your choice. Online condolences and memories may be shared at www.BrenansFH.com.