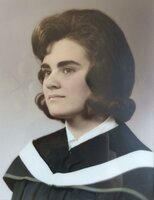 She was born in Saint John to the late Harold and Mary Ann Coughlan. Maureen graduated from Notre Dame d’Acadie in Moncton.  She went on to complete both a Bachelor of Arts degree and Bachelor of Education degree from St. Thomas University in Chatham and Fredericton.  She married the late Donald Allison Bonnell in 1968, and they lived uptown where she enjoyed many walks to the City Market pushing the pram before relocating to Millidgeville to be Don’s assistant gardener.

Maureen was a loved and respected teacher.  Although she proudly proclaimed that she taught all ages, her passion was always the primary level.  Mom often shared that grade one in particular was her favourite grade to teach as she had the pleasure of introducing the young children to the miracle of reading. Her school assignments were many including: Saint Vincent’s, Hazen White St Francis, Millidgeville North High School, St Patrick’s, Holy Trinity, Woodlawn Elementary, St. John the Baptist, and Princess Elizabeth.  She enjoyed representing her colleagues as a school representative for the New Brunswick Teachers’ Association (NBTA).  Maureen was eager to celebrate all milestones of her extended family which led her to regularly showcase her cake decorating skills to recognize said achievements. Maureen enjoyed socializing as evidenced many years ago when she spent an entire school year learning to play bridge.  At the end-of-year tournament, she knew very little of the game but gained many lifelong friends.  Speaking of socializing, Maureen and Don also enjoyed organizing many trips through Europe for high school graduates.  Trips were a recurring theme where Maureen and Don with their children traveled extensively each summer by travel trailer throughout New England, Quebec and Atlantic Canada.  In later years, they also traveled with her siblings to various Floridian and Caribbean destinations as well as several cruises.

Resting at Brenan’s Funeral Home, 111 Paradise Row., Saint John (634-7424) with visitation on Wednesday, June 15 from 2 – 4 PM and 6 – 8 PM and Thursday, June 16 from 10 – 11 AM followed by a Mass of Christian Burial at 12:10 PM from her beloved Cathedral of the Immaculate Conception at 91 Waterloo St., Rev. Doug McNeill as Celebrant.  The burial will immediately follow at St. Joseph’s Cemetery.  Although flowers are welcomed, the family would also appreciate donations to Alzheimer’s research or a charity of the donor’s choosing. Online condolences may be expressed at www.BrenansFH.com.