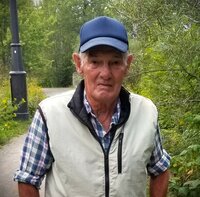 It is with heavy hearts that the family of Robert Medley Hutchins, beloved husband of the late Elva Hutchins (nee Cosman), announce his passing on Saturday, July 30th, 2022, at the Saint John Regional Hospital.

Born in Head of Millstream, New Brunswick, on June 27th, 1937, he was the son of the late Lola (nee Mason) and Milton Hutchins.

Robert will be missed by his daughter Susan Hayward (Michael) of Oshawa, Ontario; grandchildren Erik and Owen Hayward; his siblings Mae Akerley and Vaughan Hutchins (Valerie), as well as several nieces and nephews.

Besides his parents and beloved wife, he was predeceased by his son Randy Hutchins, his siblings Jean and Basil Hutchins, his brother-in-law Gordon Akerley, and his sister-in-law Dora Hutchins.

Cremation has taken place. A Committal Service will be held at the Head of Millstream United Baptist Cemetery on Monday, August 8th, 2022, at 11am. Arrangements entrusted to Brenan’s Funeral Home (634-7424).

For those who wish, remembrances to the Heart and Stroke Foundation or a charity of the donor’s choice would be appreciated. Online condolences and memories may be shared at www.BrenansFH.com.