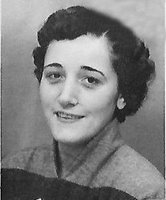 The death of Johanna Eleonore Weber, of Quispamsis, NB, wife of the late Walter Oskar Weber, occurred on Saturday, May 19, 2018 at the Saint John Regional Hospital. Johanna (Janet) Weber, born June 13, 1929 in Frankfurt Am Main, Germany. Johanna (Janet) married her beloved Walter Oskar Weber over sixty-five years ago and they had one son Wolfgang. She is predeceased by her parents and her beloved husband Walter. She is survived by her son Wolfgang, one sister who lives in Germany, many nieces and nephews. In her early years she loved to dance and cook. She was famous for her German potato salad, spaetzle, and especially her carrot cake. She delighted to show hospitality and always had cookies, cake or Lindt chocolates to share with any and all who dropped in as guests. If you came by in the evening you were likely to have a little taste of German Schnapps to finish the day off. She took delight in knitting and after having given it up for many years, recently found much delight in being able to do it once again. Janet was baptized as one of Jehovah’s Witnesses on January 31st, 1970 and was one of the first faithful and loyal servants of Jehovah in the Rothesay Congregation for over forty-eight years of dedicated service. She was well known in the congregation for her love of babies and all of the children. She often told stories about what the little ones were doing and how helpful they were to the older ones at the meetings. It was especially exciting to her to see their spiritual progress. She longed to see the future resurrection happen as one of Jehovah promises found in the Bible. Janet knows that she and Walter are both safely in Jehovah’s memory awaiting that time when they will be restored to perfect health on the promised paradise earth so close at hand. A special thank you to the friends, Physicians and staff at the Saint John Regional Hospital for the support, respect, care, and kindness they displayed during these difficult days, it will always be appreciated. Resting at Kennebecasis Community Funeral Home, 152 Pettingill Road, Quispamsis, (849-2119) with visitation on Wednesday, May 30, 2018 from 2-4 and 6-8 PM. Funeral service will be held on Thursday, May 31, 2018 from Kingdom Hall of Jehovah's Witnesses, 14 Elliott Road, Quispamsis, at 3:00 PM. For those who wish, remembrances may be made to the Heart and Stroke Foundation of Canada. Online condolences may be placed at www.KennebecasisFH.com