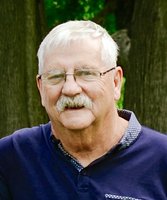 Surrounded by his family, the death of David "Davie" Kerr of Quispamsis, husband of Sandra (Gentles) Kerr occurred on Wednesday, January 2, 2019, after a courageous battle with cancer. Born on July 29, 1944 in Glasgow, Scotland, he was a son of the late Donald and Rachel (Carr) Kerr. Davie left school at the age of 14 to work as a plater at the Shipyard in Glasgow. He then left Scotland and emigrated to Canada in 1966 with only 46 pounds in his pocket. He then began to work at the Shipyard in Collingwood, ON, where he met the love of his life, Sandra. In 1986, the family moved to Saint John, where Davie began to work as Planner at the Saint John Shipyard, then was employed at St. Catharine's Shipyard for several years until his retirement in 2004, returning to Quispamsis to be with his growing family. Besides his wife and family, Davie's biggest love was Football (soccer), he was the biggest Celtic Football Club fan known in the area. Other than family and football, Davie loved listening to Rod Stewart. He loved to travel, and spent many weekends in the summer at Hilltop Campground in Maine with family and friends, an avid poker player, golfer, and enjoyed his Thursday nights out with his boy, David, but most importantly, watching his children and grandchildren grow. Davie is survived by the love of his life, Sandra, of 46 years, his loving children; Rachelle Lanigan (Sean), and David (Lethe) both of Quispamsis, his grandchildren, whom he adored, Molly and Sean Lanigan, Fenwick, Preston, and Paisley Kerr, brother Donald Kerr (Margaret) of Collingwood, ON, as well as several nieces, nephews, cousins, extended family and close friends. Besides his parents, he was predeceased by his brothers; James, and William. A memorial service celebrating Davie's life will be held on Monday, January 7, 2019 at Kennebecasis Community Funeral Home, 152 Pettingill Road, Quispamsis (849-2119) at 12PM, with visiting starting at 10AM. For those who wish, remembrances may be made to Kennebecasis High School Drama Program. "You will never walk alone"