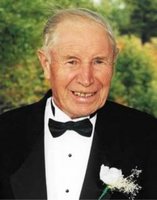 The death of Leonard Alan Miller of Saint John occurred on Sunday, October 2, 2016 at Ridgewood Veterans Wing. Born in Saint John, Alan was the son of the late J. Leonard and E. Marjorie (Pitt) Miller. Alan is survived by his four sons, James "Jim" (Shelia) Miller of Johnson Settlement, Stephen (Lori) Miller of Martinon, William "Bill" (Karla) Miller of Summerville and Leonard (Janet) Miller of Ketepec; three daughters, Patricia (Douglas) McKinney of Rothesay, Mary Mallory of Ketepec and Della (Leonard) Day of Johnson Settlement; fourteen grandchildren; thirteen great-grandchildren; brothers, John Miller of St. Stephen and Robert Miller of Summerville; sister-in-law, Marie Gray of London, ON and Nephew, John Gray of London, ON. He was predeceased by his wife, Roberta "Bobbie" (Gray); daughter, June Miller and brother-in-law, Gerald Gray. Alan was a loving husband and father; an avid outdoors man and a long serving member of the Dr. R. J. Collins Branch #1 TVS Royal Canadian Legion. We would like to thank the staff of Ridgewood Veterans Wing for their compassionate care of our father over the past year. Although there will be no visitation, relatives and friends are invited to attend the Legion Tribute and Service of Remembrance, which will be held from the Church of the Resurrection, 20 MacDonald Avenue, Grand Bay-Westfield on Thursday, October 6, 2016 at 11:00 AM and will immediately be followed by a reception. A private interment will take place in Ocean View Memorial Gardens. Arrangements are under the care and direction of Brenan’s Bay View Funeral Home, 1461 Manawagonish Road, West Saint John (634-7425). In lieu of flowers, remembrances may be made to the Church of the Resurrection, Ridgewood Veterans Wing - Comfort Fund, Royal Canadian Legion Branch #69 or a charity of the donor’s choice.