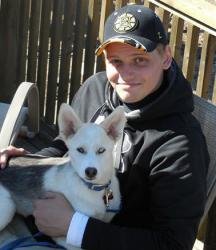 It is with great sadness that the family of Peter Fox of Saint John announces his passing, which occurred on Sunday, March 1, 2015, at the Saint John Regional Hospital after a two year battle with cancer. Born in Victoria, BC on January 31, 1993, he was the youngest son of Michael and Sheila (MacKinnon) Fox. Peter graduated from Saint John High School in 2011 before attending UNBSJ, where he completed a year and a half of his engineering degree until he became ill. He loved playing sports; which included hockey, lacrosse and his true passion football. Peter grew from a Hound to a Seawolf, loving every minute of his time with his football family. He also enjoyed playing video games, cards and a good Game of Thrones with the boys. He will be sadly missed. In addition to his parents, Peter is also survived by his brothers, Robert (Meaghan Higgins) and Christopher all of Saint John; paternal grandmother, Margaret Fox of Saint John; maternal grandfather, John MacKinnon (Mary) of Victoria, BC; maternal grandmother, Ann MacKinnon of Victoria, BC; aunts, Kim Murphy of Halifax, Jackie Bannister (Carl) of Salmon Arm, BC and Isabel MacKinnon of Victoria, BC; uncle, Andrew Fox (Chi) of Burnaby, BC; as well as cousins, Stephanie Murphy, Alyson and Drew Bannister and Sean, Claire and Aubrey Fox. He will also be sadly missed by his husky pup, Kadence. He was predeceased by his paternal grandfather, Allen Fox. Resting at Brenan’s Bay View Funeral Home, 1461 Manawagonish Road, West Saint John (634-7425) with visiting on Wednesday, March 4 and Thursday, March 5 from 2-4 and 6-8 PM. The funeral service will be held from St. Mark’s United Church, 50 Dexter Drive, West Saint John on Friday, March 6, 2015, at 2:00 PM. For those who wish, remembrances may be made to the SJRH Foundation.

Share Your Memory of
Peter
Upload Your Memory View All Memories
Be the first to upload a memory!