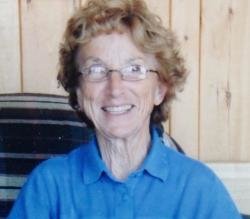 Surrounded by her loving family, Joan E. (Wilkins) Lint, wife of the late Gerald Herbert "Gerry" Lint, passed away on Tuesday, March 10, 2015 at her residence in McNair Manor in Moncton. Born August 14,1933, in Canterbury New Brunswick, she was a daughter of the late Josephine Wilkins (McKay) and Arthur Wilkins. Joan graduated from Canterbury High School and later from Mount Allison in 1952. She moved to Saint John to work at the Bank of Nova Scotia and later retired from the private accounting firm of A.M Chipman. Joanie’s life was dedicated to her family and friends. She loved spending her summers at the family cottage on Grand Lake and frequent travel with both Gerry and friends to many destinations. Many hours were spent playing bridge with her very special friends, golfing, cross country skiing and skating. She was a warm, loving and fun Grammie to her precious grandchildren. Joan was a member of St. Mark’s United Church and an active member of the UCW for many years. She would often tell stories of her many cherished memories working in the church. Joan will be sadly missed by her sons: Andrew (Holly) of Quispamsis, and David (Carolyn) of Moncton; beloved grandchildren: William, Matthew, Madeleine, and Mikayla; her sister, ShirleyWishart (Don); four nephews, and one niece. Besides her parents and her husband, Joan was predeceased by her sister, Jeanette Cunnane. Resting at Brenan’s Bay View Funeral Home, 1461 Manawagonish Road, Saint John (634-7425), with visiting on Thursday, March 12, 2015 from 1pm to 5pm. A funeral service will be held at St. Mark’s United Church, 50 Dexter Drive on Friday, March 13, 2015 at 11 am. Reception to follow. A private family interment will take place immediately following the reception. In lieu of flowers, remembrances to the Alzheimer Society of New Brunswick, St. Mark’s United Church, or a charity of the donor’s choice would be appreciated by the family. Please place online condolences and remembrances at www.brenansfh.com.

Share Your Memory of
Joan
Upload Your Memory View All Memories
Be the first to upload a memory!