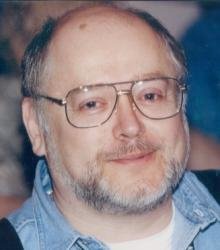 Richard "Rick" Douglas Daley of Clarendon, NB passed away on April 18, 2015 at Bobby’s Hospice. He was the husband of Candy (Taylor) Daley. Born in Saint John, NB on May 17, 1953 he was the son of the late Richard and Thelma (Leonard) Daley. He is survived by his children Tanya (Richard) Guthrie and Richard Daley lll; step-children Melissa O’Neill, Michael (Candy) O’Neill, Christopher (Marina) O’Neill and Corie (Jeff) O’Neill; grandfather of Courtenay, Kira, Brehdyn, Michael, Dawson, Keenan, Kelsey and Brycen; sisters Bonnie (Cecil) Ryall and their daughter Sherri-Lyn and Diane Daley; as well as several nieces and nephews. Rick retired after 35 years with the Canadian Coast Guard in March of 2011. Throughout the years he worked as a boilermaker, as a steward on the Louis St Laurent in the Arctic, environmental response, as a lighthouse keeper on Machias Seal Island and as a firefighter in Terrace, BC. He spent most of his career as local president of Canadian Union UCTE 60604. He was passionate about the union. An employers nightmare and an employees dream he fought tirelessly to protect the rights and benefits of his fellow co-workers. After retirement he worked as a commissionaire until he was diagnosed with cancer in February 2014. Being a lifelong member of the Church of Jesus Christ of Latter Day Saints, Rick was a man of faith. It was his faith, his positive attitude and great sense of humour that gave him the ability to embrace life as his health was declining. He was a devoted family man with a great love of travel and was truly an inspiration to all who knew him. Resting at Brenan’s Bay View Funeral Home, 1461 Manawagonish Road, West Saint John (634-7425) with visiting on Tuesday, April 21, 2015 from 2-4 and 6-8 PM. The funeral service will take place at the Church of Jesus Christ of Latter Day Saints, 177 Manchester Avenue, Saint John on Wednesday, April 22, 2015, at 11:00 AM. Interment will take place in Cedar Hill Extension Cemetery. For those who wish, remembrances may be made to Bobby’s Hospice or to a charity of the donor’s choice.