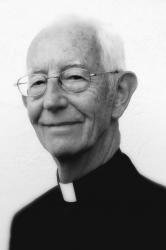 James Allistar MacDonald passed away, surrounded by family, on Saturday April 25, 2015 in Saint John, N.B. He was born in 1932 in Port Hawkesbury, Cape Breton, Nova Scotia, the son of the late Effie (MacLean) and John D. MacDonald. Jim graduated from Sydney Academy in 1950, Mount Allison University in 1953, and Pine Hill Divinity College in 1956. While at Mount Allison, besides being Student Body President, editor of the campus newspaper, involved in ROTC and playing on the rugby team, he also found time to meet and fall in love with Gwen (Bailey), also a student there. Married a few months after graduation, they started their life together in North River Bridge on the Cabot Trail at his first church. He subsequently served pastoral charges at St. Andrews United, Sydney, N.S.; Anjou United, Montreal, P.Q.; Park Avenue United, Saint John and St. James United, Woodstock, N.B. During "retirement", he supplied in the Pastoral Charges of Welsford, St. Martins, Norton and Lorneville-St Giles – an incredible 55 years of Ministry. A natural leader, throughout the years he shared his talents as Chairman of the Saint John Presbytery, in many roles in the Boy Scouts of Canada, as Captain in the army reserves, and involvement with various committees in the work of the United Church. Jim was a very kind, gentle and humble man. His family was the most important thing in his life. He loved the many family vacations, MacStack reunions, lobster boils and get-togethers with friends and family over the years. He loved all types of music, and found great joy in many Saint John concerts. He is survived by his wife of 59 years, Gwen (Bailey), his sons Alan (Laurie) of Kitchener, ON, Ross (Sharon) of Moncton, and his daughter Mary-Gwen (David) Alston of Grand Bay-Westfield. He was so very proud of his eight grandchildren – Sydney, Kelsey, Brett, Sarah, Alec, Ceileigh, James and Emily. He is also survived by his brother Rev. Ian (Virginia) MacDonald of Fredericton and his sister Sheila (Rev. Jackie) MacDonald of Sydney, N.S. He was predeceased by his older brother Fraser (Paulette) MacDonald of Cornwallis, N.S. Resting at Brenan’s Bay View Funeral Home, 1461 Manawagonish Road, West Saint John (634-7425) with visiting on Wednesday, April 29, 2015 from 2-4 and 6-8 PM. The funeral service will be held from Brenan’s Bay View Chapel on Thursday, April 30, 2015, at 1:00 PM. Interment will take place in Fernhill Cemetery. Jim was such a giving person that at Christmas and other special occasions he always preferred donations to charity rather than gifts. With this in mind, for those who wish, in lieu of flowers, donations may be made to the charity of the donor’s choice.