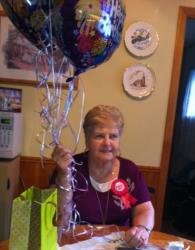 It is with great sadness that the family of Mary MacPherson announces her death which occurred on Monday, May 18, 2015 at the Saint John Regional Hospital with her family by her side. Born on May 5, 1934, in Victoria, Nova Scotia, she was a wife to the late Angus MacPherson and a daughter to the late John and Margaret (MacLean) MacLeod. She will be missed by her surviving family, her children; Kelvin (Tara) MacPherson and Heather Beaton, her grandchildren; Grayson MacPherson, Callum, Evan, Eric and Jaci Beaton, her brothers and sisters; Alexis Janes, Jean (Stephen) Butler, Jack MacLeod and Donald (Karen) MacLeod, her sister-in-law Eileen MacLeod, nieces and nephews from the MacLeod family; Stephen Butler, Brad Janes, Gina Wiegert, Jackie Theriault, Alexis Lockhart, Kendra Woodman, John MacLeod, Alexis Kneeland, Jason MacLeod, and Maryann MacLeod, along with many more nieces and nephews in the MacPherson family. Besides her husband and parents, Mary was predeceased by her brother William MacLeod, son-in-law Kevin Beaton, brother-in-law Douglas Janes and sister-in-law Dorothy MacLeod. Arrangements are under the care of Brenan’s Bay View Funeral Home, 1461 Manawagonish Road, Saint John, (634-7425). A funeral service will take place on Saturday, May 23, 2015 from the Bay View Chapel at 2:00 pm with visitation beginning at 11:00 am. Interment will take place at a later date. For those who wish, remembrances may be made to the Canadian Diabetes Association and online condolences may be place at www.brenansfh.com.