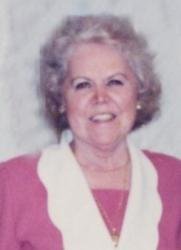 Edith Geraldine Baines passed away peacefully at " The Village", Loch Lomond Villa, Saint John on May 28, 2015. Born August 13, 1924 in Dipper Harbour, NB, she was a daughter of the late Ernest and Lillian (Belding) Thompson. She is survived by her husband of 66 years, Raymond M. Baines; son Neil, both of Saint John and daughter Dr. Lita (David) Waldron of Derby, England; brother, Eric (Beverly) Thompson, Dipper Harbour; sister Mary (Harold, deceased) Kane of Halifax as well as nephews and a niece; sister-in-law Mrs. Esther Ferguson and brother-in-law, Thor Broderson. Predeceased by her brothers, Christy (Ethel, deceased), Willard (Esther), Harley (Dorothy, deceased) and sister, Willena Broderson. Edith was a longstanding member of the former Central Baptist Church and before her illness, a member of many social and charitable groups including the I.O.D.E., The Union Club, The Westfield Golf Club, Carleton Curling Club and Meals on Wheels. She fondly remembered early days in customer service at Robin’s and Fullerton’s Pharmacies where she met Ray. She enjoyed entertaining and summer time at her family cottage in Dipper Harbour. She also enjoyed family outings, gardening, bridge and till late in life amazed her family with her recall of cherished poems and family memories. After a short, difficult adjustment Edith felt happy and at home at " The Village" where she was well looked after by a caring staff. A lady to the end she was rarely seen without her purse! Resting at Brenan’s Bay View Funeral Home, 1461 Manawagonish Road, Saint John (634-7425), and where Rev. Ronald Curtis will conduct the funeral on Wednesday at 2:00 p.m. with a short reception to follow. Visitation will be on Sunday, May 31, 2:00-4:00 pm and Monday, June 1, 7:00-9:00 pm. Memorial donations may be made to charity of donor’s choice. Interment will be on a later date for immediate family.

Share Your Memory of
Edith
Upload Your Memory View All Memories
Be the first to upload a memory!