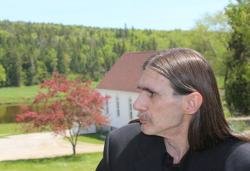 The family of Kevin Vance Fowler of Saint John and, formerly, French Village, are deeply saddened to announce his passing on July 2, 2015. Born in Saint John on April 27, 1967 he was a son of S. Roberta and the late Vance S. Fowler. Residing in French Village for most of his life, Kevin was a graduate of Kennebecasis Valley High School. He was an avid reader and movie fan. While hampered by illness for much of his adult life, on those days when he felt well he retained a curious mind and enjoyed a lively conversation. In addition to his mother Roberta, Kevin is survived by brothers Steve (Valerie Walsh), Saint John and Brian (Gena) of French Village, nephews Christopher Fowler (Mike LeSage), Toronto, Jeremy Fowler (Sarah Chiasson), French Village and Chris Walsh (Suzy Kimball) of New Jersey, along with many aunts, uncles and cousins. Kevin was predeceased by, and deeply missed, his father Vance who passed in 2008. Just weeks ago, the death of his always loving Grandmother Louise brought our family together, reuniting Kevin with aunts, uncles and cousins he hadn’t seen in many years. We will all now treasure those memories even more deeply, for the time we shared with Kevin and the pleasure he took in being a part of it. Resting at Brenan’s Bay View Funeral Home, 1461 Manawagonish Road, Saint John, NB (634-7425) with visiting on Saturday, July 4, 2015 from 7-9 pm and Sunday, July 5 from 2-4 and 6-8 pm. A funeral will take place on Monday, July 6, 2015 at 2:00 pm from Brenan’s Bay View Chapel with interment to follow in St Andrew’s Church Cemetery, French Village. For those who wish, remembrances made to Bobby’s Hospice would be appreciated by the family.

Share Your Memory of
Kevin
Upload Your Memory View All Memories
Be the first to upload a memory!