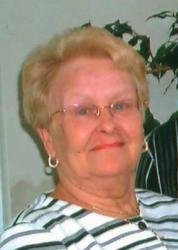 Surrounded by her family, the death of Shirley Anne (Kirkpatrick) Whittaker of Quispamsis, NB, wife of the late B. Robert Whittaker, occurred on Saturday, August 22, 2015 at the Saint John Regional Hospital. Born in Saint John on February 27, 1939, she was a daughter of Nancy (Murdie) and the late Ensley Kirkpatrick. Shirley was employed with the Rothesay Post Office for several years until her retirement. She was a member of the Kennebecasis Senior Citizens Club, Quispamsis Senior Citizens Club, St. Paul’s Anglican Church and was an active volunteer for Meals On Wheels. Shirley enjoyed bingo, reading, bowling and playing cards. In addition to her mother, Shirley is survived by her children, Barry Whittaker (Jill) of Quispamsis,NB, David Whittaker (Marilyn) of Rothesay, NB, and Ellen Whittaker-Brown (Kevin) of Kingston, NB, siblings; Nancy Iannizzi (Robert) of St. Catharine’s, ON, Stanley Kirkpatrick (Gladys) of Saint John, Barbara Meade (Thomas) of Long Reach, and Lois Saunders (John) of Rothesay, grandchildren, Kelli Whittaker of Quispamsis, Craig Whittaker (Alisha) of Elk Point, AB, Curtis Whittaker (Ellie) of Rothesay, Alyson Brown of Kingston, and Katie Whittaker of Quispamsis, aunt Beryl Kirkpatrick of Rothesay, as well as several nieces and nephews. Besides her husband, Shirley was predeceased by her brother David Kirkpatrick and grandson Cory Douglas Whittaker. Resting at Kennebecasis Community Funeral Home, 152 Pettingill Road, Quispamsis (849-2119) with visiting on Tuesday from 4:00 - 8:00 PM. Funeral service will be held at St. Paul's Anglican Church, Rothesay on Wednesday, August 26, 2015 at 11:00 AM. Interment to take place at Ocean View Memorial Gardens. For those who wish, remembrances may be made to the Canadian Cancer Society or Meals on Wheels, would be appreciated.