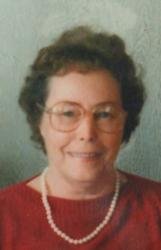 The death of Treva Eileen Robinson of Rothesay, NB, wife of the late C. William Robinson, occurred on Tuesday, September 1, 2015 at the Saint John Regional Hospital. Born in Sussex, NB, on December 7, 1919, she was the daughter of the late Robert and Violet (MacArthur) Johnson. Treva was an avid bridge player, she enjoyed gardening, playing poker, lobster and camping at Martin Head. She was a member of the St. Paul's W.A. for many years. Treva is survived by her children; Ted Robinson (Joan) of Barrie, ON, John Robinson (Lynn) of Calgary, AB, and Ralph Robinson (Pauline) of Rothesay, grandchildren; Stephen, Karen(Ted), Laura (Ralph), Maggie (John), and two great grandchildren, Matthew and Stewart. Resting at Kennebecasis Community Funeral Home, 152 Pettingill Road, Quispamsis (849-2119) with visiting on Thursday from 6:00 - 9:00 PM. Funeral Service will be held at St. Paul's Anglican Church, Rothesay on Friday, September 4, 2015 at 2:00 PM. Interment to take place at a later date. Following the service there will be a reception at the home of Treva Robinson, 11 Robinson Street, Rothesay. For those who wish, remembrances may be made to the Canadian Cancer Society or to the Heart and Stroke Foundation of New Brunswick.

Share Your Memory of
Treva
Upload Your Memory View All Memories
Be the first to upload a memory!