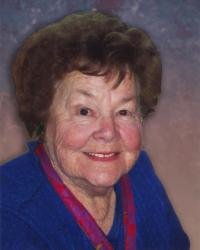 It is with great sadness that the family of Margaret Rioux announces her passing which occurred at her residence at 21 Peat Drive, Quispamsis, on Sunday, October 25th, 2015 at the age of 87. Margaret was the beloved wife of the late J. Paul Rioux. She was born in Bathurst to the late Daniel and Victoria Cripps. Margaret is survived by sons J. Pierre (Nancy) Quispamsis and P. Jacques (Linda) of Shelburne, Nova Scotia, granddaughter Paula (Aaron) Collins of Ottawa, grandsons Marc of Red Deer, Robert of Ottawa, and Adam (April) of Quispamsis. Great grandchildren Emily and Grace Collins, Owen and Ezra Rioux. Margaret is also survived by two sisters, Teresa (the late Bud) Murray, Renforth and Mary (Jim) McBreen, of Bournemouth, England, one brother Victor (Billy) Cripps of Milwaukee, USA, and numerous nieces and nephews. Margaret was predeceased by brothers Patrick, John, Thomas and sister Eleanor. Early in her life in Saint John she was active in various choral groups. Upon moving to Quispamsis she became active in the local Liberal Association (she’s a very happy Liberal now!) and had numerous friends in the Town who always enjoyed her infectious smile and positive attitude towards life. Margaret is resting at Kennebecasis Community Funeral Home, 152 Pettingill Road, Quispamsis (849-2119) with visitation on Wednesday, October 28th, 2015 from 2 to 4 pm and 6 to 8 pm. A Mass of Christian Burial will be celebrated at St. Mark’s Catholic Church, 171 Pettingill Road, Quispamsis on Thursday, October 29th, 2015 at 10:00 am. A reception will be held in the church hall immediately following the Mass. Interment will take place in Bathurst at a later date. In Marg’s memory remembrances may be made to Bobby’s Hospice or to a charity of choice.

Share Your Memory of
Margaret
Upload Your Memory View All Memories
Be the first to upload a memory!