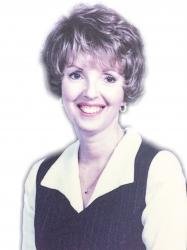 Linda Dianne Tower of Quispamsis, NB, passed away peacefully surrounded by her family at Rocmaura Nursing Home on Monday, October 26, 2015. Born in Sackville, NB, on September 12, 1949, she was the daughter of Clarence and Joyce (MacNeill) Turner. After graduating from Community College in Moncton, she became Secretary to the Dean of Students at Mount Allison University. She left that to move to Chatham, NB on her marriage to Colin Tower, whose work transfers resulted in their living in several New Brunswick communities. Linda was a devoted wife and mother. She loved music and was an accomplished pianist. She played piano and directed choirs in the churches they attended. She enjoyed doing embroidery work, needlepoint, cross stitch and painting. Linda is survived by her loving husband Colin; three sons, Luke Tower (Nicole) of Riverview, Timothy Tower (Amanda) of Saint John and Joel Tower (Cheryl) of Moncton; one granddaughter Esther Tower of Moncton; her mother Joyce (MacNeill) Turner of Saint John; two sisters, Deborah Greene (Kenneth) of Rothesay and Martha Wry (Danny) of Calgary; several aunts, uncles and cousins. She was predeceased by her father Clarence Turner. The family wishes to thank the staff of St. Joseph's Hospital, Kingsway Care Centre and Rocmaura Nursing Home for the care and compassion they showed to Linda and her family over the past five years. Resting at Kennebecasis Community Funeral Home, 152 Pettingill Road, Quispamsis (849-2119) with visiting on Thursday from 2-4 and 7-9 PM. Funeral Service will be held at Kennebecasis Community Funeral Home Chapel on Friday, October 30, 2015 at 11:00 AM. Interment to take place at Sackville Memorial Cemetery. For those who wish, remembrances may be made to the Alzheimer Society or the Rocmaura Nursing Home Foundation.

Share Your Memory of
Linda
Upload Your Memory View All Memories
Be the first to upload a memory!