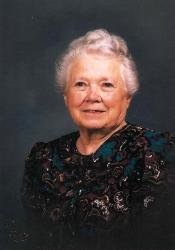 The death of Edna Bessie (Holmes) Lewis, wife of the late Roland Murray Lewis, occurred on Wednesday, October 28, 2015 at Kings Way Care Centre. Born on September 23, 1914, in Vankleek Hill, ON, she was a daughter of the late James Ernest and Flossie (Shields) Holmes. Bessie is survived by her children, Gordon (Susan) of Bedford, NS, daughter; Judith Colwell of Vernon, BC, brother; Hiriam Holmes of Ottawa, ON, sisters; Pearlie Bowen (Sterling) of Picton, ON, and Grace Linton of Metcalf, ON, grandsons; Paul and Glenn Colwell, four great-grandchildren, as well as several nieces, nephews and cousins. Besides her husband, Bessie is predeceased by her brothers Walter & Wallace, and sisters; Beulah Holmes, Mae Kirkland and Viola Hodges. Resting at Kennebecasis Community Funeral Home, 152 Pettingill Road, Quispamsis (849-2119) with visitation on Friday, October 30, 2015 from 4:00 to 8:00 PM. Funeral Service will be held at Rothesay Baptist Church on Saturday, October 31, 2015 at 11:00 AM. Interment to take place at Rothesay Baptist Cemetery. For those who wish, remembrances may be made to Kidney Foundation or to a charity of the donor's choice.

Share Your Memory of
E.
Upload Your Memory View All Memories
Be the first to upload a memory!