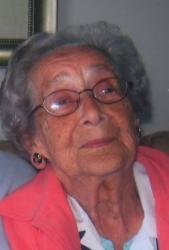 The death of Dorothy Evelyna Watson, wife of the late Jim Watson , occurred on October 30, 2015 at Embassy Hall, Quispamsis, NB. Born on November 10, 1914, in Saint John, NB, she was a daughter of the late Frank and Mabel (Wright) Davidson. Dot was a member of the ACW and Eastern Star. She was a member of the Ladies Auxiliary of the Rothesay Legion, and she was involved with the St. John Ambulance for many years, along with her husband. Dot enjoyed camping, traveling and knitting. Survived by her sister M. Irene Gates of Rothesay, brother Arthur Davidson of Saint John, special niece Judy Davidson and her husband Lonny Stokes whom Dot cherished, as well as several nieces and nephews. The family wishes to thank the staff of Embassy Hall for their care and kindness to Dot during her time with them. Resting at Kennebecasis Community Funeral Home, 152 Pettingill Road, Quispamsis (849-2119) . Funeral Service will be held at Kennebecasis Community Funeral Home Chapel, on Wednesday, November 4, 2015 at 11:00 AM, with visiting one hour prior. Interment to take place at Ocean View Memorial Gardens. In lieu of flowers, donations may be made to the charity of the donor's choice would be appreciated.