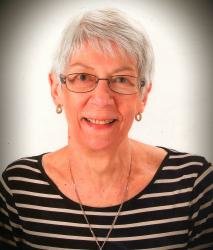 It is with sadness that the family of Sandra Ann (Burleau) Somerville of Highview Place, Quispamsis, NB announces her passing on November 3, 2015 at the Saint John Regional Hospital as a result of a sixth month battle with cancer. Sandra is survived by her husband Scott of 48 years, her sons Greg (Sue Danford) of Quispamsis and Michael of Reed's Point, grandson Kian Somerville (Kian's mother Andrea McRae) of Quispamsis, brother Peter Burleau (Theresa) of Orleans, Ontario, sister Barbara Donaldson (David) of Beaconsfield, Quebec, brother-in-law Dale Somerville(Vivian) of Hampton, Aunts Joan, Rita and Marion ,as well as several nieces and nephews. Sandra was predeceased by her mother Phyllis Rudman Burleau and father Cecil Burleau. In 1945 Sandra was born in Montreal but grew up in the Shawinigan/ Grandmere area of Quebec. She graduated from Shawinigan High School and the Shawinigan Business College followed by bilingual secretarial work at Consolidated Paper in Grandmere Quebec. In 1971 following Scott's work in Shawinigan and Morin Heights, Quebec, Sandra and family moved to Quispamsis where she became a stay at home mom and homemaker for her family as well as a supporter of Scott as he attended summer and evening courses at university. Visiting will be held at Kennebecasis Community Funeral Home, 152 Pettingill Road, Quispamsis (849-2119) on Saturday, November 7, 2015 from 2-4 and 7-9 PM. Interment of Sandra's ashes will be held with Sandra's family at Trinity Anglican Cemetery, Kingston, NB at a later date. In lieu of flowers, charitable donations may be made to the Extra-Mural Program, the Palliative Care Unit at the Saint John Regional Hospital, or to the Quispamsis Food Bank. Sandra's family wishes to thank the Kennebecasis Valley Extra Mural Nurses, Dr. Gray, and the Staff of the Oncology Department and the staff of the Palliative Care Unit at the Saint John Regional Hospital. A special thank you to Dr. Joseph McLaughlin of Quispamsis.

Share Your Memory of
Sandra
Upload Your Memory View All Memories
Be the first to upload a memory!