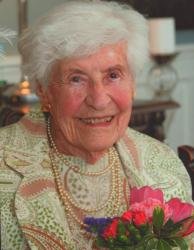 It is with sadness the family of Dorothy Lilian (Thomson) MacMurray, age 99, of Quispamsis, N.B. announces her passing, which occurred on Monday, November 16, 2015 at Kings Way Care Centre . Born on June 23, 1916 in Saint John, NB, Dorothy was the daughter of the late Charles William and Nellie (Adams) Thomson of Saint John. She was the oldest and longest member of St. David’s United Church in Rothesay, leading a very faithful and active life there since 1942. She began the Ladies Guild in the 1950’s, formed a Junior Choir and made 30 choir gowns and caps for the children and sang in and directed the Senior Choir. Dorothy lived life with great spirit and enjoyment and took great pride in all her accomplishments, one of which was mowing her own lawn until the age of 96. Dorothy is survived by her daughter Nita Claire Driscoll (Murray) and grandchildren Carolyn Claire Driscoll White (Thomas) and Steven Graham Driscoll (Lise) and by two very special great grandchildren Ava Claire Driscoll and Jay Stewart Driscoll, all of Rothesay. She was predeceased by her parents, her loving husband Stewart Graham MacMurray, a brother Murray Adams Thomson and a sister Helen Ida (Thomson) Macdonald. The family would like to sincerely thank all the staff members of Kings Way Care Centre for their kind and compassionate care over the last two and a half years. Arrangements have been entrusted to Kennebecasis Community Funeral Home ( 849-2119), 152 Pettingill Road, Quispamsis, N.B. with visitation on Wednesday, November 18 from 2-4 and 7-9 pm. The funeral service will be held at St. David’s United Church, Rothesay, NB on November 19,2015 at 11 am. Interment will be in Fernhill Cemetery following the service. In lieu of flowers, donations in memory of Dorothy may be made to Kings Way Care Centre, St. David’s United Church, Rothesay or the charity of the donor’s choice.