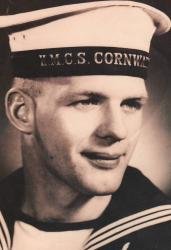 With heavy hearts and great sadness, with all of his family and friends by his side, Wayne Charles Buchanan (Gramps) passed away peacefully on Sunday, November 29, 2015 at the Saint John Regional Hospital after a courageous battle with cancer. He will be sadly missed by his loving wife Judy, his daughter Cindi Gould (Mike), his son Jay Buchanan (Linda), his sister Carol Faye and brother Jim (Shirley) of Hamilton , Ontario and several nieces and nephews. Gramps loved his grandchildren a lot, Jason, Corey, Megan, Mandi, Mitchell, CJ, Jessica and great grandchildren, always teasing, telling stories or teaching life lessons to them. He will also be missed by his hunting and fishing buddies, Pat, Hartley and Niko. At a young age Wayne moved to Alberta where he had fond memories of living and working on a cattle ranch. He later joined the navy and loved talking about his days at sea. At the age of 50 he became an electrician working on the Frigates while they were being built in Saint John and later joining IBEW local 502 which had him travelling from coast to coast, making many friends, and having the odd beer along the way. Wayne always wanted to do the right thing and was the first one to step up and help when needed. He will be deeply missed by many. Wayne was predeceased by his mother Anne Buchanan. Resting at Kennebecasis Community Funeral Home, 152 Pettingill Road, Quispamsis (849-2119) with visiting on Thursday from 2-4 and 6-8 PM. A Mass of Christian Burial will be held at St. Mark's Catholic Church, Pettingill Road, on Friday, December 4, 2015 at 10:00 AM. Interment to take place at Holy Cross Cemetery. For those who wish, remembrances may be made to the Canadian Cancer Society or to a charity of the donor's choice.

Share Your Memory of
Wayne
Upload Your Memory View All Memories
Be the first to upload a memory!