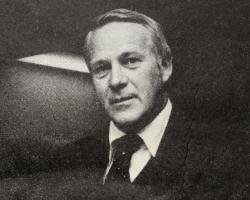 It is with great sadness that the family of David Malcolm Russell announces his unexpected passing, which occurred on April 10, 2016 surrounded by his family. David was born in West Saint John, NB on December 29, 1933. He attended St. Vincent’s Boys High School and St. Thomas University where he was an outstanding athlete in hockey, football and rugby. David was a parishioner of Our Lady of the Assumption and in later years, Our Lady of Perpetual Help. David had a long and successful career with Air Canada. During his 37 years with the company, he worked for head office in Montreal, Vancouver and eventually settled back home to Atlantic Canada where he ended his career as Manager for New Brunswick. David was an avid and accomplished golfer and was recognized for achieving five holes in one at the Riverside Country Club where he was a long time member. After retirement, David and Susan spent many winters in Florida where David was able to further fulfill his love of golf. David is survived by his beloved wife Susan of 48 years, his children David Russell Jr. (Natalie) and Tiffany Russell and his four precious grandchildren Anneke Russell, Alex Russell, Madeline Yerxa and Russell Yerxa by whom Grampie will be dearly missed. David is also survived by his four sisters Betty Lenihan, Maureen Boerner, Isabel Coates and Rosiland Murray in addition to numerous nieces and nephews. David is predeceased by his parents Matthew and Genevieve (Findley) Russell and his brother Ronald Russell. Resting at Kennebecasis Community Funeral Home 152 Pettingill Road, Quispamsis, NB with visiting on Wednesday April 13, 2016 2-4 pm and 7-9pm. A Mass of Christian Burial will be held on Thursday April 14, 2016 at 11:00am from Our Lady of Perpetual Help Church, 31 Gondola Point Road, Rothesay. For those who wish, remembrances made to the Canadian Cancer Society would be appreciated by the family.