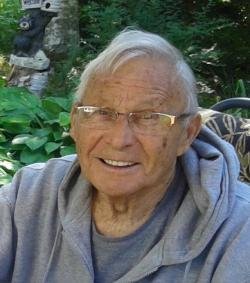 Gerald Markee left this world to be with his Lord & Savior Jesus Christ on October 10, 2016. Born August 9, 1930 in St. Andrews, NB, son of the late Jack and Lucy (Matthews)Markee. Gerald worked for Connor Bros for years as a young man. He also worked in the Sudbury mines and as a Long Shoreman. In later years, he became a carpenter, working for such companies as Marquee and Flood Construction, then he worked at Point Lepreau during the construction phase. Gerald later worked on his own or with a group of men building homes and hotels (like the Granite Inn Motel). He remodeled their Pennfield home and built their home in St. George. After retirement at age 73 he spent his time traveling with mom going for drives and picnics. Gerald , the past few years has fallen in love with Bella a Shih Tzu dog who was the heart beat at his feet. Gerald took Bella everywhere with him, she was his ever present companion. Survived by wife of 58 years, June (Eldridge) Markee and daughter Kelly (Markee) Matchett, grandsons Timothy & Jocelyn (Webber) Matchett of Fort McMurray, Cody & Brianna (Tauber) Matchett of Caronport, Saskatchewan and several nieces, nephews and cousins. Predeceased by daughter, Patricia Jean, brothers Herman Markee and Wes Matthews, sister, Margaret Markee. Arrangements entrusted to Kennebecasis Community Funeral Home, 152 Pettingill Rd, Quispamsis with visitation being held at Living Faith Church, 67B Marr Road, Quispamsis on Tuesday, from 6-8 PM and Wednesday, from 2-4 and 6-8 PM. Funeral service at 2:00 PM on Thursday, October 13, 2016. Interment will follow at the Pennfield Anglican Cemetery. Donations in memory of Gerald can be made to Atlantic Missions ~ Dale & Gwen French or to the Living Faith Church Building Fund.

Share Your Memory of
Gerald
Upload Your Memory View All Memories
Be the first to upload a memory!