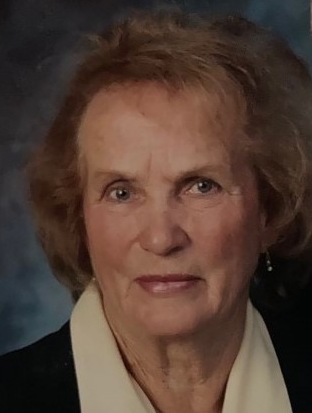 It is with profound sadness that the family of Doreen Barnett, beloved wife of Gerald Barnett, announces her passing unexpectedly but peacefully on Friday, September 10, 2021, in Rothesay, NB. Born on September 25, 1929, in Dawson Settlement, NB, she was the daughter of the late T. Pierce and S. Alberta (Richardson) Downey.

Doreen and Gerald were happily married for 73 years. Early in their married life, they moved from their hometown of Hillsborough to Saint John where they raised their five children. Doreen was devoted to their children, but somehow found the time to assist Gerald in establishing his business, whenever she was called upon. Doreen loved music and had natural talent herself. She played the piano, often accompanying friends and family in singsongs and was an active member of their church choir. Golf was another love. She was a long time member of Riverside Country Club where she had many friends and where she and Gerald could be sighted somewhere on the course on many afternoons.

Over the years Doreen and Gerald had the opportunity to travel the world on business related trips. She certainly enjoyed the travel destinations and activities, but she particularly enjoyed renewing and nurturing relationships with her fellow travel companions.

In 1987 Doreen and Gerald started spending their winters in Sarasota, Florida which went on for 30 years. There they enjoyed their golf, new friends, and the climate. But it is suspected Doreen’s special affection for the area was its wide variety of restaurants.

Doreen and Gerald had 14 grandchildren and 14 great grandchildren (so far). They all knew and were fond of their grandmother and great grandmother. They particularly loved the large family gatherings at their house at Christmas, summer barbecues and picnics where she quietly and lovingly presided. The get togethers were a whirlwind of activity, but she loved them.

Arrangements are under the care of Kennebecasis Funeral Home, 152 Pettingill Rd. Quispamsis (849-2119). In keeping with Doreen’s wishes there will be no visitation. A private family service will be held to celebrate Doreen’s life at 1:00 on Thursday, September 16. For those who wish to view this livestreamed memorial service, please use the link on the funeral home web site. Donations made in memory of Doreen may be given to The Saint John Rotary Club.

Share Your Memory of
Doreen
Upload Your Memory View All Memories
Be the first to upload a memory!