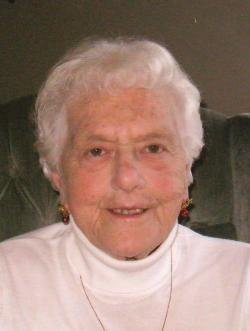 Surrounded by her loving family, the death of Theresa MacKenney, wife of the late Calvin MacKenney, occurred on Sunday, June 11, 2017 at the Saint John Regional Hospital. Born on September 5, 1931 at Saint John, NB, she was the daughter of the late Victor and Lena (Levesque) Doucet. Theresa retired from Canada Revenue Agency in 1995 after twenty-nine years and was a member of the National Association of Federal Retirees. She was a volunteer with Meals On Wheels and a member of the congregation of St. Mark's Catholic Church. As an active senior she was involved with several senior groups in the Kennebecasis Valley. Theresa bowled with the Wednesday and Friday Leagues at Fairview Lanes and loved participating in Red Hat activities. Survived by her children; Wayne (Diane), Kathy Boyd (Gerry), Neil, Kevin (Carolyn), and Cindy Christie (Andrew), sisters; Evelyn Young, and Rita Richard (Eloi), ten grandchildren, five great grandchildren, son-in-law Corey Kierstead, as well as several nieces and nephews. Theresa had a special relationship with her sister Rita and will be missed by her cousin and best friend Greta Mackereth. She loved being with her many friends for cards, bingo, music and to share laughs. Besides her parents and husband, Theresa was predeceased by her son Ryan, and sisters; Leona, Viola and Helen. Theresa's family would like to thank the Doctors and Nursing staff of 5CN for their excellent care. Resting at Kennebecasis Community Funeral Home, 152 Pettingill Road, Quispamsis (849-2119) with visiting on Thursday from 3:00 - 7:00 PM. Mass of Christian Burial will be held at St. Mark's Catholic Church on Friday, June 16, 2017 at 10 AM. Interment will take place at St. Joseph's Cemetery. In lieu of flowers, remembrances may be made to the Canadian Cancer Society, Heart and Stroke Foundation of New Brunswick or to the Charity of the donor's choice.

Share Your Memory of
M.
Upload Your Memory View All Memories
Be the first to upload a memory!