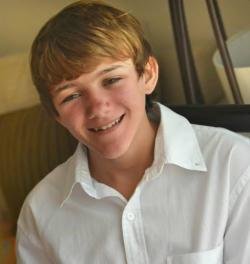 Get Directions
Wednesday
23
May

Get Directions
Wednesday
23
May

It is with heavy hearts we announce the passing of our precious Braedon Jacob Beebe Lyon, of Quispamsis. Braedon passed on Wednesday, May 16, 2018 at The Queen Elizabeth Hospital in Halifax, NS, surrounded by his loving family. Born in Saint John on January 20, 2000, he was a son of Tiffany Agnew (Beebe) and Mike Lyon, and James Agnew and Nancy Blair. Braedon was the most loving, caring brave young man we had the honor to know. Despite many health battles during his short time here on earth, Braedon never stopped smiling and loving life. He loved hanging out with his friends, the Anaheim Ducks, playing video and computer games and watching other people play video games on Youtube. Besides his loving parents, Braedon is survived by his grandparents; Cathy and Randy Kalte, Donnie and Irene Lyon, Karen and David Agnew, Linda Anderson and Jeannette Blair, aunts and uncles; Mike and Nora Merrick, Rebecca Beebe, Stephen and Bridget Agnew, Daphne Williams, Aleisha Graves, Kira Howard and Godmother Loretta Hodges and best friends; Devon Daley, and Jayme Gallant, as well as several cousins. Braedon was predeceased by his grandfather George Blair. Resting at Kennebecasis Community Funeral Home, 152 Pettingill Road, Quispamsis (849-2119) with visitations on Wednesday from 2-4 and 6-8 PM. A Celebration of Braedon's life and reception will be held at Kennebecasis Community Funeral Home Chapel on Thursday, May 24, 2018 at 3 PM. For anyone that is considering making a donation, we ask that you donate to the Children’s Wish Foundation in Braedon’s memory.

Share Your Memory of
Braedon
Upload Your Memory View All Memories
Be the first to upload a memory!