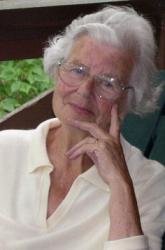 Mere words fail to express our gratitude for having Peggy, such a gracious, generous, humourous spirit, in our lives. Born in Lewes, Sussex, England on May 21, 1919, Peggy Pescod Parker married John William Coffey on June 6, 1942. They met when she volunteered at a Red Cross canteen during World War II. After the war, they reunited in Saint John and built their first home in Renforth, where they had a daughter and three sons. Peggy was the epitome of the devoted mother, loving wife and loyal friend to Dot Hanley, her best friend in Canada. For better opportunities, the family moved to Oromocto and once the youngest was in school, Peggy worked full time as a secretary to a dozen brigadier generals while almost single-handedly running the Coffey household. Through her work, she met many international visitors whom she brought home for meals. After retirement, Peggy and John relocated to Renforth beside their first home. They enjoyed travelling to England, Europe, Australia and New Zealand and wintered many years in various Floridian communities where they continued to renew or make new friends. Although quiet, Peggy was always involved in her communities as Red Cross volunteer, IODE member, tennis player (until age eighty-two) to name a few and a long term member of the Our Lady of Perpetual Help congregation. Surrounded by her family, Peggy peacefully passed away April 20, 2013 at the age of almost ninety-four at Bobby's Hospice, Saint John. She leaves this earth to join her beloved husband, John, who predeceased her February 1, 2007. Celebrating her life, she leaves her children: Susan (David) Baird in Keswick Ridge, Mark (Audrey) Coffey in Kitchener, Bill Coffey in Brantford, Mike (Arnella) Coffey in Renforth; nine grandchildren and one great-grandson and a number of younger friends including Hanley offspring. Resting at Kennebecasis Community Funeral Home, 152 Pettingill Road, Quispamsis (849-2119), with visiting on Tuesday from 2-4 and 7-9 pm. A Mass of Christian Burial will be celebrated from Our Lady of Perpetual Help Church, 31 Gondola Point Road on Wednesday at 11:00 am. Interment will take place in Our Lady of Perpetual Help Cemetery at a later date. In lieu of flowers, remembrances to the Alzheimer's Society, Bobby's Hospice, or a charity of the donor's choice would be appreciated by the family. Online condolences and remembrances may be placed at www.KennebecasisFH.com

Share Your Memory of
Peggy
Upload Your Memory View All Memories
Be the first to upload a memory!