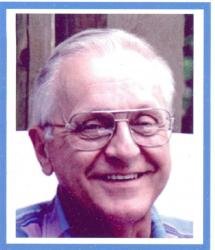 Get Directions
Thursday
9
May

Get Directions
Thursday
9
May

Husband, Father, Grandfather, Brother, Uncle and friend, has passed away at the Saint John Regional Hospital on May 7, 2013. Don was born in Sydney, N.S on July 12, 1932, the son of the late Claude and Jean (McBratney) Ward. He attended the Nova Scotia College of Art, and was the Senior Graphic Artist at CJCB in Sydney, and CHSJ in Saint John. Don and several of his friends from the art college formed the Harmony Lake group of artists, and met at various locations for many years to sketch, paint, and enjoy critiquing each other's work. He was a water colourist whose paintings are in many collections. Don enjoyed giving art lessons in his home, and at NBCC over the years. He is survived by his wife of 55 years, Eileen, daughter Carol Ann (Mark Mercer), grandsons Jared, and Jordan, who resides in Edmonton, sister Lillian in Sydney, brother Bob in Ontario, as well as several nieces and nephews. He was predeceased by his parents, brothers William and Harold, and an infant sister. Resting at Kennebecasis Community Funeral Home, 152 Pettingill Road, Quispamsis (849-2119), with visiting on Thursday from 2-4 and 6-8 pm. The Funeral Service will be held from Rothesay Baptist Church on Friday, May 10 at 2:00 pm. Interment will take place in Rothesay Baptist Cemetery at a later date. For those who wish, remembrances to Word of Life (www.wol.ca), or a charity of the donor's choice would be appreciated by the family. Due to allergies in the family, no flowers will be accepted. Online condolences and remembrances may be placed at www.KennebecasisFH.com