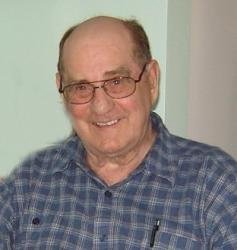 Bill Randles, husband of the late Hazel (Darrah) Randles, passed away peacefully after a brief illness on October 2, 2013, at the Dr. V.A. Snow Centre. Born in East Riverside-Kingshurst on December 20, 1930, he was a son of the late William and Mary (Warman) Randles. An auto mechanic by trade, Bill operated an Esso service station in the north end of Saint John for 15 years and continued to work as a mechanic until his retirement in 1999. He and his wife Hazel resided in Red Head for several years, and later in Nauwigewauk and Quispamsis. Bill loved to golf and could be found on the course any morning enjoying a game with his good friends, John Steele, John Marr and Dr. Jack Waite. He was a long-time member of the Riverside Golf and Country Club, the Nauwigewauk Darlings Seniors Club, and prior to moving to the Dr. V.A. Snow Centre, attended Quispamsis United Church. Bill played hockey in his youth and later was a coach in the East-West Suburban Hockey League. He was a loyal Boston Bruins fan and never gave up trying to convert his Montreal Canadiens son-in-law, Paul. He is survived by his daughter, Janet Randles (Paul Owen) of Hampton, son Tim (Nadine) of Richmond, BC, brother John Randles of Dartmouth, NS, brothers-in-law Alex (Barb) Darrah of Long Creek, Bobby (Sharon) Darrah of Oromocto, Archie (Rita) Darrah and Johnnie Darrah of Chipman, sisters-in-law Carrie (Ray) Vince, Quispamsis, Vera Protz, Marylou (Randy) Dickinson and Mary Darrah, both of Chipman, as well as several cousins, nieces, and nephews. In addition to his wife and parents, Bill was pre-deceased by an infant daughter in 1963, his son William in 2001, as well as sisters Evelyn McPhee, Helen Norman, and Audrey Smith. Resting at Kennebecasis Community Funeral Home, 152 Pettingill Road, Quispamsis (849-2119), with visiting on Saturday and Sunday from 2-4 and 7- 9 p.m. The Funeral Service will be held from Quispamsis United Church, 372 Hampton Road, on Monday at 1:00p.m. Interment will take place in Fernhill Cemetery. For those who wish, remembrances to the Dr. V. A. Snow Centre, Romero House, or a charity of the donor's choice would be appreciated by the family. Online condolences and remembrances may be placed at www.KennebecasisFH.com