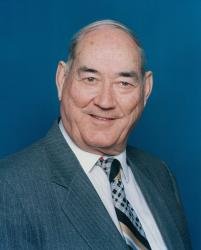 Joseph Beverly Gillis of Quispamsis, husband of Merriam E. (Page) Gillis, passed away peacefully on Saturday, December 07, 2013 at the Ridgewood Veteran’s Centre, surrounded by his loving family. Born at Tower Hill, Charlotte County on May 7, 1922, he was a son of the late Harry and Loretta (Cunningham) Gillis. Joe spent his formative years in Bocabec, where he attended a one room rural school. He was a Veteran of World War II, serving overseas with the Royal Canadian Corps of Signals, attached to the No. 1 Railway Corps. Upon his return to Canada, Joe had a long career with NBTel, retiring in 1982 after 41 years of service. Joe was very active in his community, serving for a term as a Councillor and Deputy Mayor of the Village of Gondola Point. He was an active member of St. David’s United Church, where he sang in the choir and held various positions. He was Past President of the Fairvale Home and School Association, and was active in the Telephone Pioneers of America, the Saint John Kiwanis Golden “K” Club, and the Beaus and Belles Square Dance Club. Joe was also a member of the Corinthian Lodge #13 F. & A.M. for 65 years. He was a 33° Scottish Rite Mason and served as T.P.G.M. in the Saint John Lodge of Perfection. He served as M. W. S. in the Harington Sovereign Chapter Rose Croix. He was a past Provincial Grand Master in the Royal Order of Scotland and a member of the Saint John Luxor Temple Shrine, where he served for 15 years as the Editor of the Luxor Year Book and as a trumpeter in the Luxor Marching Band. He was very active in the Order of the Eastern Star where he served as Worthy Patron and held other offices. In his spare time, Joe enjoyed travel, gardening, and sports. In addition to his wife of 67 years, Joe is survived by two sons, Brian Gillis (Diana Marie) of Rothesay, and Duane Gillis of Saint John; grandchildren Jennifer, Kyle, and Meredith; siblings Melvin Gillis of Saint John, Allan Gillis of Saint John, Phillip Gillis (Eileen) of Lepreau, Jean Jarvis of Quispamsis, Olive Berriault of Bocabec, Vera Gillis of Newport, Maine, and Grace Marlien (Louis) of London, ON; and several nieces and nephews. Joe was predeceased by an infant brother, Ivan; and by sisters Charlotte Cote and Elaine Bacon. Resting at Kennebecasis Community Funeral Home, 152 Pettingill Road, Quispamsis, (849-2119) with visiting on Tuesday, December 10, 2013 from 2-4 and 7-9 PM. The funeral service will be held on Wednesday, December 11, 2013 at 2:00 PM from Saint David’s United Church, Rothesay. Interment will take place in the Rockland Cemetery, McAdam, at a later date. For those who wish, remembrances to Saint David’s United Church, the Parkinson’s Foundation, or any charity of the donor’s choice would be appreciated by the family. Online condolences and remembrances may be placed at www.KennebecasisFH.com. A Masonic Lodge Tribute Service will be held on Tuesday at 6:30 at the funeral home.

Share Your Memory of
Joseph
Upload Your Memory View All Memories
Be the first to upload a memory!