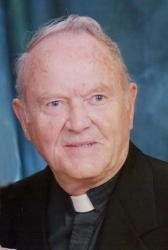 Kenneth Douglas Brown passed away on the morning of December 23, 2013. He leaves behind his wife Pamela, his children Kent, Craig (Sharon), and Kimberley (Paul), grandchildren Kent Jr, Kelly, Tamara, Jillian, Melanie, Amy, Matthew, Allison, Sarah, David, and Alyssa. Also surviving are his brothers Allan (Juliet) and Keith (Claire), and his many great-grandchildren and nieces and nephews. Mourning his also are his daughter-in-law Donna, and step-children Debbie (Terry), Shelagh, and Gavin (Nicola). He was predeceased by his son Edward (Donna) and brothers Frank, Margo, Donald, and Philip. Ken was a much beloved husband, father, brother, and grandfather for whom family was the first priority. He lead a full and interesting life. He was born in Winnipeg and at the age of 17 in 1943, joined the RCNVR where he served on a corvette in the North Atlantic during World War II, returning home to pursue law enforcement in the RCMP, including the Musical Ride, the Winnipeg Police Force, and the Inspector's Office of the Manitoba Liquor Control Commission. At age 55, he took an early retirement to return to University to further his education. He then was ordained to the priesthood of the Anglican Church and enjoyed serving parishes in Manitoba, North Dakota, Saskatchewan, and New Brunswick as rector. He continued to serve Saint Paul's Anglican Church in Rothesay until the day before his death. To mention only a few of his interests, carpentry and general handiwork, gardening, golf and reading were hobbies. He was a man of faith. Although there will be no visitation, friends and family are invited to attend the funeral service, which will be held from Saint Paul’s Anglican Church, Rothesay, on Saturday, December 28th at 11:00 am. Interment will take place in Fernhill Cemetery.In lieu of flowers, donations may be made to Saint Paul’s Anglican Church Building Fund or charity of your choice. The funeral arrangements are under the care and direction of Kennebecasis Community Funeral Home, 152 Pettingill Road, Quispamsis (849-2119). Online condolences and remembrances may be placed at www.KennebecasisFH.com

Share Your Memory of
Kenneth
Upload Your Memory View All Memories
Be the first to upload a memory!