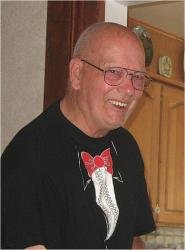 Charles Elphinstone Waddell, of Reeds Point, NB, passed away on Wednesday, February 19, 2014 at the age of 80. Charlie to his many friends grew up in Reeds Point and attended school in Kingston. Both Charlie and his dear wife for 55 years, Maria opened their hearts and their homes not only for their own children, but for so many others who needed a home. For many years, he worked as a mechanic for Otis Marr, until the garage closed. He then put his many skills to work for Art Miller. Charlie was a mechanic, carpenter, and electrician. If there was a job to do, or a question to be answered, Charlie was your man. His family will always be grateful for all he did for them, from trips, building swings, wooden horses, and making sure they had bikes in their youth. Another legacy left to his children, was the love of animals. He is survived by five children; Ann Waddell (Bim), Mark Waddell (Geralda), Sonya Davis (Dougie), Maria Wiggins (Mac), Eugene Waddell (Tammy), grandchildren; Denise Miller (Todd), Daniel Levesque (Lori), Sarah Davis (Mike), Christopher Davis (Sarah), Scott Davis (Courtney), Jody Wiggins (Brian), Casey Wiggins (Don), Lisa Wiggins (Nick), Amanda Oulette (Mark), Brandy Waddell, Marco Waddell (Jen), Aiden Waddell and Morgan Waddell, and great grandchildren. There were also many foster children, who have been as close to him as his own, Lorraine, Sherry and Esther Marshall, siblings; Donald "Bung" Waddell (Doreen), Roma Scott (Jim), niece, Debbie Jones, nephews; Steve and Ronnie Waddell. Charles was predeceased by his wife, Marie (Sudfels) Waddell, parents, Lorne and Doris Waddell, and grandchild, Norbert Kenneth Levesque. The family wishes to express special thanks to the staff of the Palliative Care Unit for their care and compassion. Resting at Kennebecasis Community Funeral Home, 152 Pettingill Road, Quispamsis (849-2119) with visiting on Friday from 2-4 and 6-8 PM. Funeral Service will take place at Kennebecasis Funeral Home Chapel on Saturday, February 22, 2014 at 11:00 AM. Interment to take place at a later date. For those who wish, remembrances may be made to the Zachery White Foundation, would be appreciated.

Share Your Memory of
Charles
Upload Your Memory View All Memories
Be the first to upload a memory!