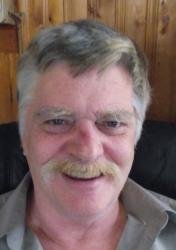 The death of Robert Brian James of Quispamsis, NB, husband of Bonnie (Gates) James, occurred on Sunday, February 23, 2014 at the Saint John Regional Hospital. Born in Saint John, on January 25, 1949, he was a son of the late Robert and Kathleen (Dickson) James. Brian was an avid fisherman, he enjoyed many summers spent at Big Salmon River. He also enjoyed playing the guitar. Besides his wife, Brian is survived by his son Robert James (Jill) of Quispamsis, brother Douglas James of Saint John, grandchildren Hannah and Grace, as well as several nieces and nephews. He was predeceased by his brother Ronald. Resting at Kennebecasis Community Funeral Home, 152 Pettingill Road, Quispamsis (849-2119) with visiting on Tuesday from 2-4 and 6-8 PM. Funeral Service will take place at Holy Trinity Church, Hammond River, on Wednesday, February 26, 2014 at 11:00 AM. Interment to take place at Holy Trinity Cemetery. In lieu of flowers, remembrances may be made to the Canadian Cancer Society or to the KV Food Bank, would be appreciated.

Share Your Memory of
R.
Upload Your Memory View All Memories
Be the first to upload a memory!