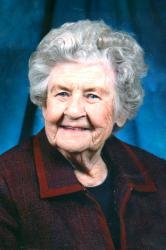 Libbie Abbott, wife of the late Raymond Abbott, passed away on March 20, 2014, at her home. Born in Saint John on December 19, 1921, she was a daughter of the late William and Elizabeth (Duffy) Beamish. Libbie was a member of St. Paul's Anglican Church in Rothesay, the Order of the Eastern Star, and enjoyed bingo, bridge, and watching curling. Libbie resided in Rothesay, living in the same home since 1948. She was mother to her nieces Mavis Drummond of Hampton and the late Marie Cavanagh (Peter). Besides her niece Mavis, Libbie is survived by her chosen grandchildren Steven (Monique) Cavanagh and their children Chelsea and Kaylee, Penny (Kevin McEvory) Cavanagh and their daughter Abby, Andrew (Jannet) Cavanagh, Angela (Rick) Ryan and their son Nickolas, Derek (Emma) Drummond and their son Thomas, Christine (Philip) Cliff and their children Brandon and Jordan, and Mary Ann Drummond, and her children Kathrynn and Zackary. Libbie is also survived by many cousins, nieces and nephews. In addition to her husband and parents, Libbie was pre-deceased by her brothers William and Raymond Beamish and sisters Margaret Walsh, Edith Smith Anne Dempster and Theresa Allaby, as well as her niece, Marie Cavanagh. Resting at Kennebecasis Community Funeral Home, 152 Pettingill Road, Quispamsis (849-2119), with visiting on Sunday from 2-4 and 6-8 p.m. The funeral service will be held from St. Paul's Anglican Church, Rothesay, on Monday, March 24th at 1:00p.m. Interment will take place in Titus Hill Cemetery at a later date. For those who wish, remembrances to a charity of the donor's choice would be appreciated by the family. Online condolences and remembrances may be placed at www.KennebecasisFH.com

Share Your Memory of
Elizabeth
Upload Your Memory View All Memories
Be the first to upload a memory!