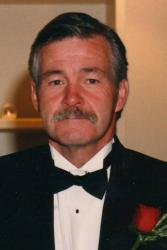 The death of William "Bill" Francis McNeill of Maces Bay, NB, husband of Joan (Brown) McNeill occurred on Monday, October 27, 2014 at the Saint John Regional Hospital. Born on March 11, 1954 in Saint John, NB , he was a son of the late William and Elsie (McKay) McNeill. Bill was employed with the City of Saint John for many years until his retirement. He was also the proprietor of Bill's Custodial Services. Bill enjoyed playing darts, driving, Karaoke, barbequing and spending time at his cottage in White's Mountain. He was also a Past President of a local Royal Canadian Legion Branch. Besides his wife, Bill is survived by his daughter Lisa Adair McNeill, son-in-law Paul Tindall of Windsor, ON, brother Ernie McNeill (Sandra) of Quispamsis, NB, sister Donna Farid of Hampton, NB, grandchildren, Blake and Alexis Tindall, nieces, Vicky and Trish and nephews, Grant and Jamie. Bill was predeceased by his brother Patrick McNeill, his first wife, Deborah McLeod, and his brother-in-law Mourad Farid. Resting at Kennebecasis Community Funeral Home, 152 Pettingill Road, Quispamsis (849-2119) with visiting on Thursday from 2-4 and 7-9 PM. A Memorial Service will be held on Friday, October 31, 2014 at 11:00 AM from Kennebecasis Community Funeral Home Chapel. Interment to take place at Cedar Hill Extension Cemetery. For those who wish, remembrances may be made to the Canadian Diabetes Association.