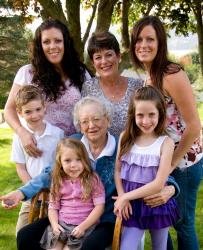 It is with sadness that the family of Aileen Grimes announces her death, which occurred on February 19, 2015 at the Saint John Regional Hospital, Saint John, NB. Born in Montreal, Quebec on May 9, 1914, she was the wife of the late Charles Henry (Harry) Grimes and the daughter of the late William & Hope (Smith) McDiarmid. She is survived by her only daughter; Joanne Wright of Quispamsis, NB; two grandchildren; Robin Wright St-Pierre and Lindsay Coté (Joe); three great-grandchildren; Abigail, Alexander and Madilyn. There will be no visitation as per Aileen's wishes. A family graveside service will be held in Montreal later in the year.

Share Your Memory of
Aileen
Upload Your Memory View All Memories
Be the first to upload a memory!