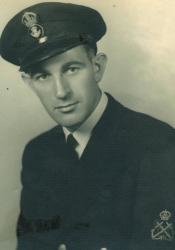 The family of Ernie Hiscott sadly announces his peaceful passing on February 23, 2015, at Ridgewood Veteran's Wing, Saint John. Ernie was born in Codroy, NL, on September 29, 1916, the first of twelve children born to Capt. John William and Olive (Ellis) Hiscock. He is survived by his beloved wife of seventy-three years, Rebecca (Higgins), three daughters, Carolyn (Duke Murray) of Long Reach, NB, Wendy (James Newman) of Hamilton, ON, and Jill (Peter Ackerman) of Dundas, ON, one brother, Jack (Edith) of Calgary, AB, and five sisters, Joyce Marquis, Kathleen Gale, and Adeline (Nat Chattaway), all of Ottawa, ON, Olive (James MacDougall) of Dartmouth, NS, and Etta (William Muise) of Smiths Falls, ON. Ernie is survived by six grandchildren, whom he dearly loved and who dearly loved him, Charles Murray (Sarah Ketcheson) of Fredericton, NB, Shannon Murray Creary (Brian) of Winnipeg, MB, Stephanie Murray Mainville (Kenn) of Rothesay, NB, Jonathan Moriarity (Naomi Gurarie) of Toronto, ON, Heather Webb of Cranfield, England, and Matthew Migliardi (Robin Moses) of Quispamsis, NB. He will be deeply missed by nine great-grandchildren, Lydia, Stephen, Ava and Daniel Mainville, Samuel, Emily and Aidan Creary, and Gideon and Grant Murray. Besides his parents, Ernie is predeceased by an infant daughter, Shelley Lynn, his four brothers, William, Maurice, Ronald and George, his sister, Alma Quigley, and his longstanding dear friend, Leonard Desormeau. Ernie was a veteran of World War II. He had gone to sea as a boy with his father, and knew the waters of the Gulf of St. Lawrence , so he joined the Royal Canadian Navy, serving on the East Coast on minesweepers, escort vessels and harbour utility boats, including the Lloyd George and the Glenevis. Dad did not love old ships; he said he hated every moment he was at sea and he did not make his bed once during his Navy Career. After discharge, Ernie worked for the CNR and then the New Brunswick Liquor Commission, retiring in 1981. In their younger days, Ernie and Becky were ardent curlers. They spent many enjoyable summers in their RV at Grand Lake and more than twenty enjoyable winters in Daytona Beach, Florida, where their hospitality was legendary. Ernie was a member of Truro Lodge #43 AM & FM for sixty-five years. In Fredericton he was an affiliated Past Master of Hiram Lodge #6. He held an honorary 33rd Degree in the Ancient and Accepted Scottish Rite of Freemasonry and was a long time member and officer of the Provincial Grand Lodge of the Royal Order of Scotland. He was a member of St. Paul's United Church in Fredericton for more than fifty years. He and Becky moved to Quispamsis five years ago, where they loved their apartment at Jubilee Hall, Shannex, until Ernie went to Ridgewood in January 2014. His family honours a faithful and loving husband, a hardworking father, a proud grandfather and great-grandfather. We will play "Ern's Waltz" for you, Dad, and remember you with joy. The family wishes to express our thanks to the nurses and staff at Ridgewood Veteran's Wing for your compassion, humanity, respect and constant love for our dad. You are doing God's work, and you are doing it with excellence and love. Thank you. There will be no visitation. The funeral service will be held at Kennebecasis Community Funeral Home, 152 Pettingill Road, Quispamsis, NB (849-2119) on Friday, February 27, 2015 at 2:00 PM. Remembrances may be made to the Ridgewood's Veteran's Wing, All Saints Church, Park Avenue, Saint John, or the Shriner's Hospital for Children.

Share Your Memory of
Ernest
Upload Your Memory View All Memories
Be the first to upload a memory!