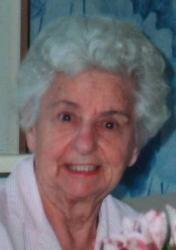 Pamela Mary Penn, wife of the late Leslie Philip Penn, passed away peacefully on Sunday, July 12, 2015 at Kings Way Care Center. Born in Montreal, Quebec on March 26, 1916. She was a daughter of the late Charles and Annie Beatrice (Bartlett) Bacon. Pamela is survived by her son James Bartlett Penn (Grace) of Rothesay, NB, and grandson Brian Penn (Maureen) of Lac La Biche, Alberta, special nieces, Doreen (MacDonald) Russell, Gail Bacon, Linda (Penn) Handis, and Debra (Penn) Sharkey, nephews, Jack Stevens, Larry Stevens (Gay). In addition to her husband and parents, Pamela was predeceased by her sisters, Francis, Doris, Charlotte, Florence, and Anne, brothers, Albert, Harold, and Alexander. Pamela was the last of her immediate family. At Pamela's request there will be no visitation or funeral service. A graveside service will be held at Hampton Rural Cemetery on Tuesday, July 21, 2015 at 1:00 PM. Arrangements are under the care and direction of Kennebecasis Community Funeral Home, 152 Pettingill Road, Quispamsis (506-849-2119). For those who wish, remembrances may be made to Kings Way Care Centre or to a charity of the donor's choice

Share Your Memory of
Pamela
Upload Your Memory View All Memories
Be the first to upload a memory!