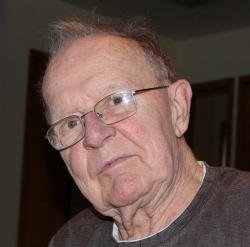 Passed away peacefully surrounded by his children at the Lennox and Addington County Hospital in Napanee Ontario after a brief illness at the age of 82. He was the son of Gerald Patton Regan and Pauline Mary Dalton. He is predeceased by his wife Shirley (Crocker) and sadly missed by his daughter Professor Sharon Regan and her partner Arthur Dunham and their son Kyle; and his son David Regan, wife Elizabeth Pugh and their children Sarah and Rebecca. He is also survived by his sister Mary Ryan and Pauline Boucher, sister-in-law Audrey Cadieux, brother-in-laws Austin Cambon, James Cadieux and William Boucher, and many nieces and nephews. Bud was born in Saint John on September 11, 1932, did his undergraduate studies at St. Francis Xavier University, attended medical school at Dalhousie University and specialized in Ophthalmology at the University of Pittsburgh Medical Center. He thoroughly enjoyed serving the Saint John community as an eye surgeon for 35 years and chief of Ophthalmology from 1975-1989 before retiring in 2000. After marrying Shirley in 1960, they moved to Trail, British Columbia where Bud was an emergency room doctor and they had their two children, then they moved to Pittsburgh for his “eyeball” training, and finally returned to the Saint John area, living in Kennebecasis Park for many years and finally to their dream home on Sagamore Point, where boating, gardening, wood working and small scale ship building kept him busy in his spare time. His favorite saying was “Non illegitimis carborundum”. In 2014, Bud moved to Newburgh Ontario to live with his daughter and had the opportunity to attend several Queen’s University events where she worked. Most notable was the 2015 Graduation Ceremony where Sharon gave a convocation address entitled “Inspiration” in his honour. The funeral will take place on July 30th, 2015 at St. Marks Catholic Church in Quispamsis, NB at 2:00 pm and a casual Celebration of Bud’s life will take place at the Shadow Lawn in Rothesay, NB from 7:00-9:00 pm. Donations to the Heart and Stroke foundation are requested in lieu of flowers. Funeral arrangements entrusted to the Kennebecasis Community Funeral Home, Quispamsis, NB.

Share Your Memory of
Gerald
Upload Your Memory View All Memories
Be the first to upload a memory!