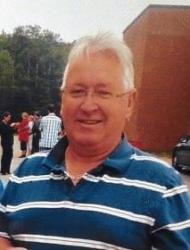 It is with heavy hearts that the family of Kerry Reed MacDonald, loving husband to Joan (Ramsay) MacDonald, annouce his passing which occurred on Thursday, August 6, 2015 at the Saint John Regional Hospital with his family by his side. He was born on March 25, 1954 in Chatham, NB to the late Cloran and Edrie (Williston) MacDonald. Kerry was a member of the Boilermakers Union Local 73. When he wasn’t working, he was supporting his children by attending their baseball and hockey games along with many activities such as biking with Casey. He was a Toronto Blue Jays and Maple Leafs fan, and he loved antique cars, owning a few himself. Kerry was an avid traveller, making his way across Canada a few times a year. He also enjoyed acquiring properties with potential and helping his family renovate their homes. Despite living a busy life, he always made time for his family. He will be dearly missed by all who knew him. Kerry leaves behind his large and loving family, his wife Joan, their children: Matthew Bendict, Candace Joan and her children: Nathan and Nicholas, Lucas Keary and his child Jackson, and Casey Marcus, his first wife Debbie (Gillis) MacDonald and their children: Jeffrey Cole and his children: Delano, Anicia and Keghan and their Mother Griselda MacDonald and Trinda Ann, his siblings: Coby (Evelyn), Vivian (Allard) LaPointe, Carol McKenna, and June Gillard, his brothers-in-law Avard, Derrick, Malcolm and George, sisters-in-law: Marilyn, Rhoda and Shirley Ray, along with several nieces and nephews and extended family. Besides his parents, Kerry was predeceased by his brother Richard and sister Faith McKnight. Resting at Brenan’s Bay View Funeral Home, 1461 Manawagonish Road, Saint John, (634-7425) with visitation being held on Sunday, August 9 from 2-4 and 6-8. A memorial service will be held on Monday, August 10 at 2pm from the Bay View Chapel. In lieu of flowers, remembrances may be made to Prostate Cancer Canada or to the Canadian Pulmonary Fibrosis Foundation.

Share Your Memory of
Kerry
Upload Your Memory View All Memories
Be the first to upload a memory!